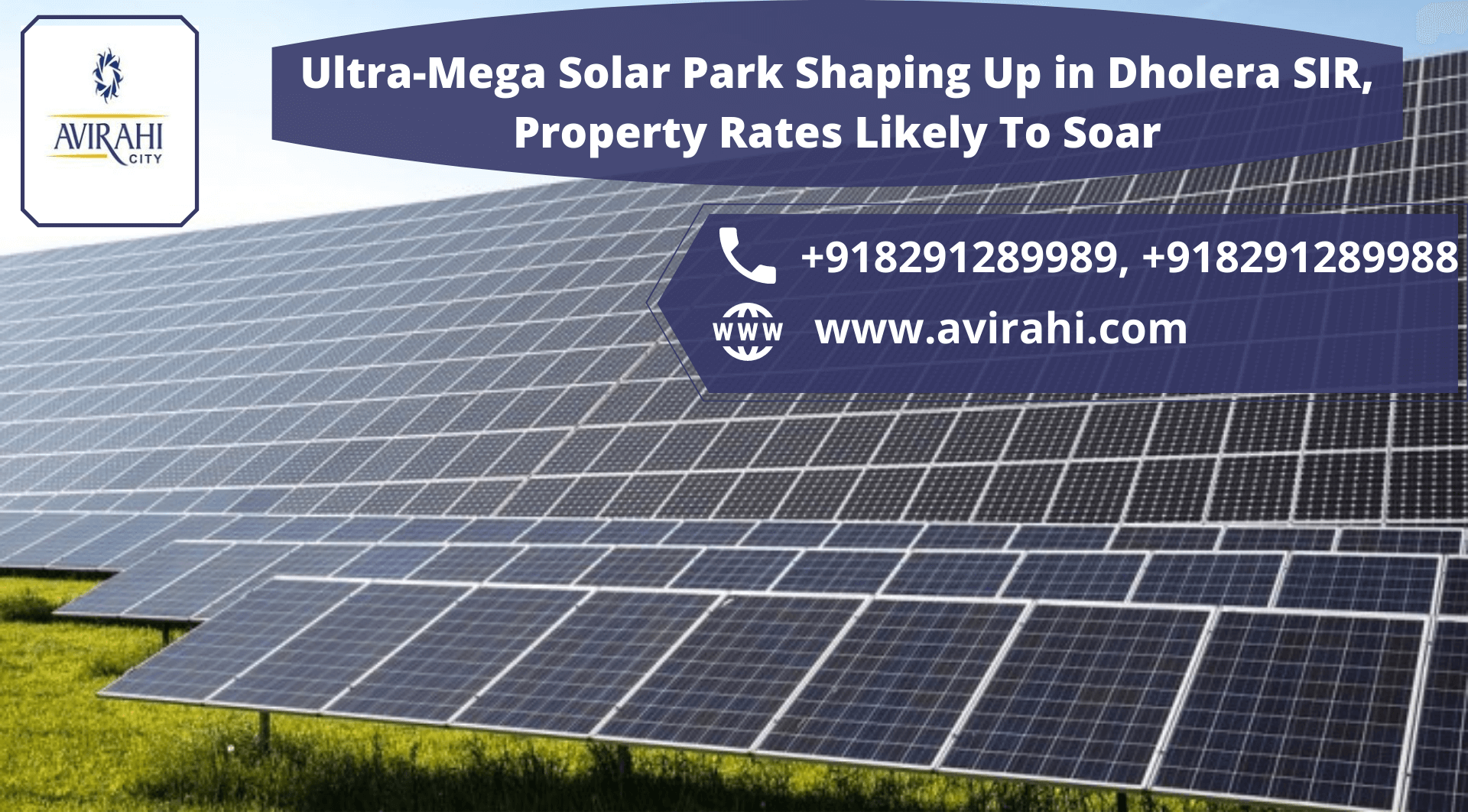 Another exciting project is coming up in Dholera SIR in the near future. Recent developments suggest that an Ultra Mega Solar Park (Phase-1) 1000 MW is shaping up in Dholera. GPCL (Gujarat Power Corporation Limited) has already drafted an implementation and support agreement for Grid Connected Solar Photovoltaic Project. A Land Lease Agreement is also drafted for the same project. The project located in Dholera, Gujarat is being developed under the National Solar Mission. With another ambitious project coming up, prices of Dholera SIR residential plots are likely to skyrocket in the near future.

The Union Ministry of New and Renewable Energy is developing a series of solar power projects across the nation. The project is named Ultra Mega Solar Power Project or Ultra Mega Solar Park. The minimum capacity of each project is 500 MW. The government is planning to develop 5000 MW solar parks in Gujarat in two phases. 1000 MW Solar Park is a part of the Phase-I project. In Phase-II park having a capacity of 4000 MW will be developed. In December 2014, the Government of India launched the National Solar Mission. Under the mission, a scheme to establish 25 solar parks and ultra-mega solar power projects to add 20 GW of installed solar power capacity was introduced. The Central Government is providing financial support for the construction of these solar projects.

As per the submitted Implementation and Support Agreement, GPCL will identify and acquire land in Dholera SIR for developing essential infrastructure for the solar park. It includes an internal transmission system, water supply, road connectivity, a drainage system, and others. The amount spent on developing infrastructure by GPCL will be collected as one-time charges as per the fixed schedule. These charges will be considered as Upfront Development Charges or solar power park development expenses. It will include the capital cost for land development and providing common infrastructure like an internal pooling substation (33kV/220 kV). For the operation and maintenance of the facilities, annual O&M costs will be separately charged. The validity of the agreement will be 25 years from the SCOD of the project. On mutually agreed terms and conditions, it can be extended further. However, it should be determined 180 days before the expiry date.

Interested investors can avail of two options for payment. In the first option, they can make a quarterly advance payment. This option does not extend the benefit of discounts to investors. The second option opens a window for yearly advance payment in which investors will get a discount at the rate that is equal to the State Bank of India MCLR lending rate as on 1st April of the respective financial year.

As stated in the draft, GPCL will give advanced possession of the land and allow SPD (Solar Power Project Developer) to work at the site if a minimum of 25% of UDC is paid. However, the investor will have to submit a bank guarantee for the remaining amount of UDC. Only after making 100% payment of UDC, GPC will execute the Lease Deed. In the first year, the annual O&M of CIFSP charges will be calculated at the rate of Rs. 90,000 per MW. SPD has to pay O&M of CIFSP charges at escalated 5% on or before 30th April at the beginning of each financial year throughout the agreement period. SPD is liable to pay first-year annual O&M charges on a pro-rata basis within 15 days from the SCOD (Solar Commercial Operation Date).

The draft clearly mentions that water will be metered and charged for SPD. They can purchase water at the rate of Rs. 38 per Kilo Litre for the year 2019-20 on a pre-allocated basis based on advance demand. The price of drinking or potable water is fixed at Rs. 38 per kilolitre. For recycled water, SPD will have to pay Rs. 20 per kilolitre. An extra 5% of the basic water rate will be charged by GPCL as administrative charges. Within 15 days from the signing of the agreement or signing of the implementation and support agreement, the lessor will have to deliver vacant possession of the land to the lessee.

The lease rent fixed for the year 2019-20 is Rs. 10,000 per hectare. Every three years, there will be an increment of 15% in the lease rent. The loss incurred by fire, natural calamities, or accident will be borne by the Lessee. It will be the Lessee’s responsibility to get insurance from an insurance company registered with IRDA. A copy will have to be submitted to the lessor about the accounting year within six months from the expiry of the accounting year. As per the agreement, SPD will not be able to transfer, assign, let, underlet, sublet, license, mortgage, charge, encumber, or part with the possession of the Demised Premises or any part of it. Prior permission of GPCL is essential for any such activity.

Not only the Government of Gujarat but also the Union Government is promoting Dholera as the first smart city in the country. Dholera is pitched as an alternative investment hub for the companies seeking shelter outside of China after the anti-China wave took the world by storm. There are many reasons why Dholera is thriving at an unprecedented speed. With several national, international companies coming up in Dholera, the prices of property in Dholera SIR is increasing rapidly. If you are planning to invest in residential property in Dholera, Avirahi city is the best destination you should consider. The houses, residential plots, and villas built under this scheme have all the modern amenities and smarter means of transportation that can redefine luxury and comfort.